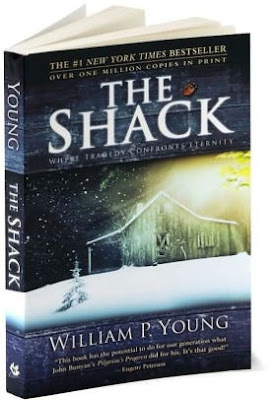 Today we are going to comment on the book A Cabana. Written by William P. Young, this work was recognized by all corners of the world, for its excellence in writing and charming story.

The story is so incredible, real, it's like we're living it all, along with the characters.Young claims that much of the story has to do with his own life experience and that he wrote the book at a time when he himself needed solace.

Did writing the story really help you?

The Cabana tells the story of Mackenzie Allen Philips, who for a long time lived immersed in a sea of ​​pain and suffering caused by the kidnapping and death of Melissa, his youngest daughter.

Mack has always believed in God, but he was never a saint, a religious fanatic, but when he lost Missy, his little girl, his relationship with God came to nothing. How could he believe in a God, not heavenly, after all that had happened?

But one frosty winter morning, Mack receives a mysterious note. Everything indicated that it was written by God, inviting him to go to an abandoned hut, where his daughter died.

Mack will never be the same after returning to the place of his most regretful memory.

Mack had a very difficult childhood, his father was an alcoholic, he abused his wife and also him. At thirteen, the boy tired of his father's abuse ran away from home and never saw him, nor his mother, again.

His entire life story influenced his relationship with God.

But let's talk about how it all started, why Missy disappeared!

Mack decides to go for a walk with the kids. He was getting ready to continue his journey when the canoe, where his children, Kate and Josh were out for a ride, capsized and the two threatened to drown. Mack then runs off to save his son, and leaves Missy alone near the camp, and when he returns, he doesn't find the girl anymore, and so begins all his torture.

He then begins a maddening quest to find the girl, but the only clue he gets is that a little girl was seen in a green jeep with an unknown man.

The authorities manage to find a Ladybug brooch at the scene of the crime with specific details that the FBI after examining, realizes to be the signature of Killer Girls, a mysterious killer that no one can find.

But Mack doesn't give up looking for his daughter, and after a few days, he finds an abandoned cabin, where he finds his daughter's dress and a can of blood.

Mackenzie felt as if her life was ending at that moment.

How will he be able to bear such pain?

The years pass and, on a cold winter morning, alone in his family's residence, Mack decides to check his mail, it was snowing, the ice covered all the way, but when he picks up his letters, he has a surprise. At the time he goes crazy, it can only be a joke in bad taste.

But he can't stop thinking about the strange note, he decides not to tell his wife anything, the subject is too painful.

Finally, he decides to go to the cabin, taking a weapon with him to defend himself, as he fears that he is the murderer.

But when he arrives at the cabin, he finds the Holy Trinity in physical form. And in this exciting moment in history, the author details the process of approximation between Mack and God.

And there, in that abandoned cabin, Mack comforts his heart. He comes to understand why things happen, why Missy was kidnapped and killed.

God showed that father, that his daughter did not suffer that she felt nothing during the passage. May your spirit live happily and in peace.

The way William P. Young detailed the Holy Trinity is surreal, totally out of the ordinary we might imagine.

The Cabana is a magnificent read that everyone should read.

A work that should be appreciated as a true prayer, a story full of tenderness, love, transparency and surprises.

The cabin teaches us to have faith, proves us that nothing is by chance.

The answers Mack finds will surprise you and can transform your life in just as profound a way as it did for him.

God is so powerful, why doesn't he do anything to ease our suffering?