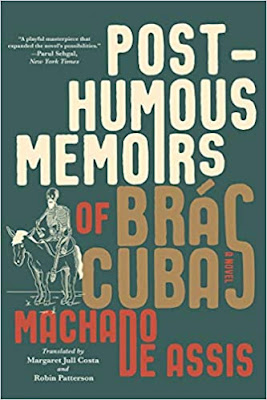 Posthumous Memoirs of Brás Cubas, a classic written by Machado de Assis, which tells the story of Brás Cubas from his death, since initially the narrator himself observes that to make the narrative more interesting and beautiful, he had decided to start it with the end. He was therefore not a deceased author, but a deceased author. Machado de Assis had an interesting insight when writing such a work, as it is totally different from anything ever published.

Thus, the first chapter begins precisely with the death of Brás Cubas and his burial. The cause of death would have been pneumonia, which he didn't take care of properly, but the fact is actually due to a grandiose and useful idea, according to himself, an idea that he turned into a fixation. One morning, walking around the country house where he lived, he thought of inventing a sublime medicine, an anti-hypochondriacal poultice, intended to alleviate human melancholy. To justify the creation, before the authorities, Brás drew attention that the cure it would bring would be something truly Christian, in addition to not denying the financial advantages that such a product would bring. However, already on the other side of the world, he confesses that the real reason was to see his name written on the medicine boxes and in all advertising sources, because the packages would bear his name. Simply crazy.

Brás Cubas was born on October 20, 1805. It was a great celebration for the whole family. Many visits, and the father was proud that his son was a man. Brás received many pampering during childhood. Since the age of five he had been nicknamed "devil boy". He himself admits that, in fact, he was one of the most evil and mischievous of his time. One of his pranks was to break a slave's head because she had refused him a spoonful of coconut candy when the boy was six years old. Prudêncio, a boy who was a slave to the family, was his everyday horse. Brás also recounts the pranks he used to do, but that seemed to be of no importance to his father, who admired him and scolded him in the presence of others, kissing him in particular. At the age of nine, the boy attended a dinner organized by his father in his home to commemorate the defeat of Napoleon. At the end of dinner, Brás wanted a jam, but everyone was distracted listening to one of the learned men present, Dr. Vilaça. The boy started to ask for the candy, then he screamed, yelled and was taken out of the room by his aunt Emerenciana.

That was enough to make him feel an enormous need for revenge against Dr. Vilaça. She kept an eye on him until she caught him one night kissing Dona Eusébia, the sister of a sergeant-major. So that everyone would know, he left the farm shouting what he had seen.

Brás Cubas grew up normally attending the boring school, and there he met his best friend Quincas Borba. Both boys were very mischievous.

After this period of his life, Brás reveals to the reader his affair with Marcela, a beautiful Spanish prostitute. Completely involved by such a girl, his father sent him to study in Europe, fearing his son's deep involvement with a prostitute.

Brás travels to Portugal, where he studies. He confesses that he was a mediocre student, but that didn't stop him from getting his degree. But now back in Rio de Janeiro, Brás arrives in time to see his mother alive, but already very ill, on the verge of death because of stomach cancer.

For the first time, he is faced with a real loss, and confesses that until then he only worried about futile things. He was unhappy with the death of his mother, so after the seventh day mass he went to spend some time in a house in Tijuca. It only took a few books, a shotgun, clothes, cigars and of course, Prudêncio. And there is a surprise when the slave tells the boss that an old friend of the family, Dona Eusébia, moved next door. Brás doesn't want to meet her, as he remembers his antics in the past. And on the same day his father informs him that he wants his son back in the social life and also says that he will choose a girl for him to marry, Brás is reluctant, but the father is not defeated.

But by then Brás Cubas is already in love, Virgília is her name, and she is the daughter of counselor Dutra.

But there appears in the story Lobo Neves, who not only steals his girlfriend, but also ingratiates himself with Counselor Dutra. Brás' father is deeply disappointed and hurt, dying after a few months.

Virgília marries Lobo Neves, and shortly afterwards her husband is elected. But in fact she married out of interest, and she really loves Brás Cubas.

The two become lovers, and meet regularly. Lobo Neves adores his wife and trusts her entirely. In fact, he didn't have much time to watch his steps, since he was totally devoted to politics.

Brás narrates the meeting he had with Quincas Borba, who had become an unfortunate street beggar. And he realizes that the ragamuffin had stolen his watch.

Brás Cubas receives the news that Virgília will have to move, as her husband has been transferred. He goes crazy, asks his lover not to abandon him, but by some luck, Lobo Neves ends up inviting him to go along, naming him as secretary.

Rumors that the two are lovers are getting stronger, so now that they're really together, more discretion is needed. But time passes and all the charm that Brás had is broken, and thus ends the romance between Brás Cubas and Virgília.

Quincas Borba reappears, bringing back the watch he had stolen from Brás, and their friendship grows stronger, Quincas becomes a regular at Brás' house.

In his conversations Quincas shows Brás several projects and he listens carefully so he can use them for his own benefit.

Brás Cubas left this world shortly after Quincas Borba, because of an illness he had caught when he was dealing with an invention of his called the Brás Cubas plaster. And the book concludes: “When I got to this other side of the mystery, I found myself with a small balance, which is the last negative of this chapter of negatives: I didn't have children, I didn't transmit to any creature the legacy of our misery.”.