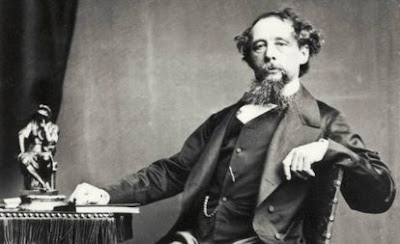 Thick clust'ring on the bough!

How faded are they now!

Of love once true, and friends once kind,

Dispersed by every breath of wind,

Charles Dickens (1812-1870) was an English writer, author of the novels “David Copperfield”, “Oliver Twist”, “Christmas Carol”, among others. He was the most popular and humane of the English novelists.

A master of suspense, satirical humor and horror, he portrays the London of his time. He was received by Queen Victoria as a great representative of English letters.

His father was a clerk in the Navy Treasury in the city of Portsmouth, but he lived on loans and could not repay them. In 1822 he decides to flee to London, taking his family with him.

Living in an attic on a poor London street in 1924, John is arrested for debt. At the age of 12, Charles Dickens went to work in a grease factory, where he stayed for several months.

His servitude ends and he returns to school when his grandmother dies and his father receives an inheritance, with which he pays his debts and regains his freedom.

Charles Dickens goes back to school and enters Wellington House Academy, but he soon had to leave school and get a new job.

In 1827 he is employed as an apprentice in the house of a judicial prosecutor. At the age of 20, a graduate stenographer, he works at the True Sun newspaper to report on parliamentary meetings and election campaigns.