Seventeen years ago you said

And everybody thinks that you are dead,

So I, as I grow stiff and cold

To this and that say Good-bye too;

And everybody sees that I am old

And one fine morning in a sunny lane

Some boy and girl will meet and kiss and swear

That nobody can love their way again

You will have smiled, I shall have tossed your hair. 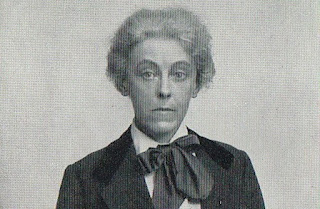 Mew’s life was largely unhappy. Two of her brothers died in infancy and another in boyhood, and a brother and sister were committed to mental hospitals at a young age. Mew and her sister Anne vowed to remain childless so as not to transmit what they believed to be a family disorder.

In the 1890s Mew set about publishing her stories. She adopted many beliefs of the New Woman, traveling unescorted to France, smoking cigarettes, and dressing unfashionably, but she remained sexually repressed. When her father died in 1898, Mew, her sister, and her mother began a slide into genteel poverty. In 1923 several influential admirers, including Thomas Hardy, secured a government pension for Mew. Her sister Anne was diagnosed with cancer in 1926; Mew nursed her until she died the next year. While hospitalized for minor surgery in 1928, Mew poisoned herself.

Mew published short stories and essays in several periodicals before publishing the lyric poetry that secured her reputation. Her first book of poems, The Farmer’s Bride (1916, expanded 1921; U.S. title, Saturday Market), was praised for its natural, direct language, including Wessex country dialect. The title poem and “Madeleine in Church”—in which a prostitute addresses the Virgin Mary—are noted for their then avant-garde conversational rhythms. The Rambling Sailor (1929), a posthumous collection of 32 previously uncollected poems, brought the number of Mew’s published poems to 60.

Mew had numerous admirers, including Virginia Woolf, Ezra Pound, Sara Teasdale, John Masefield, and Hugh Walpole. Foremost among them, however, was Hardy. Critics noted that the two writers influenced each other, Hardy admiring Mew’s country sensibility and belief in human cruelty and Mew captured by the tragic love of Hardy’s Jude the Obscure (1895).