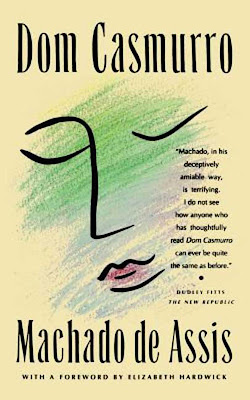 Published in 1899 by Machado de Assis, Dom Casmurro is one of the greatest classics of Brazilian literature. Narrated in the first person, it parallels great works of universal literature.

Bentinho (Bento Santiago) and Capitu (Maria Capitolina) have been neighbors since they were children. In adolescence, they realize that there is a feeling between the two of them that is different from simple friendship.

Capitu has a strong personality, in addition to being very intelligent, while Bentinho, who is more fragile, is often indecisive and dependent on his mother's will, so much so that, destined to be an intern in a seminary, to later follow the career of a priest, by force of a promise from her mother (Dona Glória), it is Capitu who, subtly, acts in the sense of annulling this obligation.

Adults, get married. Escobar, married to Sancha, is also an important character in the story. Bento's best friend, a friendship that comes from their teenage years, he regularly visits Bentinho and Capitu's house.

Escobar dies in the sea, swimming, and, due to the pain reaction manifested by Capitu during the wake, considered exaggerated by Bento, he starts to suspect that Capitu and Escobar could have had an “affair”. Bentinho even begins to think that Ezequiel, his son, is similar to Escobar. These suspicions almost drive him to suicide.

The marriage comes to an end. Capitu and her son live in Europe, where Capitu dies. Bentinho, without success, tries to escape solitude, maintaining furtive relationships with other women, but he becomes an authentic solitary, closed in on himself and, as far as possible, ignoring the world.

From this behavior comes the nickname of Casmurro, suggested by a boy who, in view of the recognized culture of Bento Santiago, reads to him poems of his writing, so that Bento gives him a critical opinion about it, but Bento Santiago, disinterested for everything and everyone, ignore it.

Years later, Ezequiel returns to Brazil to visit Bentinho, with whom he has a friendly but distant dialogue.

The work basically consists of the story of a young man who seeks to unite the two halves of his life: the first, marked by the search for an ideal of happiness (a happy marriage), and the second, marked by the struggle to recover that happiness through his doubts. and suspicions.

In addition, the work is famous for the fact that it does not present a definitive outcome: the reader does not know if, in fact, Capitu came to betray her husband, or if Bentinho's exaggerated jealousy (demonstrated in so many moments of the narrative) causes that he becomes obsessed with the idea that he is being betrayed.

The novel is narrated in the first person by Bento. This option allows the author to keep in the reader's mind the doubt about Capitu's fidelity. However, it is necessary to emphasize that the main theme of Dom Casmurro is not adultery. This one, if it happened, is of secondary importance, even for Machado de Assis himself. Capitu's betrayal or non-betrayal functions as a means for the author's observations, at least in part, on the personal or intimate reasons for the man's conduct.

Much more interesting and intelligent than the eventual adultery in this narrative is the slow and gradual construction, in Bentinho's mind, of the possibility of adultery.

Capitu is one of the best-built characters in world literature, given her extraordinary psychological complexity. In addition to her, the character José Dias, an aggregate of the house of Dona Glória – Bentinho's mother – deserves to be mentioned, as he is a character with an interesting structure. Finally, Dom Casmurro is one of the best works of Brazilian and universal literature; it is an original novel, even in the fact that it is all a flashback. In it, Machado de Assis' talent reached the highest point of his technical and inventive capacity.