Divinity has never been so close to its Creation as in the book The Shack, so simple and touching. Far from looking like the Mosaic image of the vengeful and punishing God, She displays herself in all her compassionate power, but also in her energetic and persistent determination.

Anyone who hopes to find yet another self-help book or the libel of a particular religion soon realizes that they are wrong when they read on. The more the reader delves into the pages of this unusual work, the deeper he wants to go. And little by little you feel that something inside you is changing, especially if you open your mind to a new spiritual vision. Best of all, it's a universal work, so anyone, regardless of their religion, will fall in love with this story.

Those who fear falling into a snare, in another mushy reading, should also be unconcerned. Although the plot, at first, seems to be heading towards more of an ordinary melodrama, soon an unexpected twist takes it in unexpected directions. It is difficult to summarize this plot without revealing the mysteries hidden in the pages of this book.

Basically the story revolves around the deep disappointment suffered by the protagonist, Mackenzie Allen Phillips, better known to family and companions as Mack. The narrator is practically this character's best friend, in charge of transposing the deep experience lived by his partner on paper.

Right at the beginning, in an atypical preface, the reader is informed by the narrator that one of the main characters of this plot is a mysterious hut, witness to a tragic event that definitively marks the life of the protagonist and his family. A descendant of an Irish-American lineage, Mack already carries painful marks from his childhood, especially his relationship with his father, in his heart.

Overcoming the past, he forms a new family, alongside Nannete A. Samuelson, named by her husband and close friends as Nan, with whom he has five exceptional children - Jon, Tyler, Josh, Katherine and the youngest, Melissa or Missy. , an unusual girl, full of brilliant ideas and conceptions for her age, six years old.

A weekend that was supposed to be very special, in which Mack feels closer than ever to Josh and the daughters, with whom he went on a final vacation adventure, before school resumes, turns into a terrifying nightmare. with Missy's unexplained disappearance. From then on, with all the evidence pointing to a terrible crime, the protagonist plunges into a dark abyss of sadness and pain.

Four years later, however, the protagonist has the opportunity to review his past in light of a new understanding. Ironically, Mack's encounter with himself and his terrifying inner ghosts takes place in the very place where it all began, the cabin where his Missy had supposedly been murdered. Guided by an intriguing note deposited in his mailbox, he embarks on a surprising journey that promises to reconcile his soul with the Divinity he cannot forgive.

This book, conceived by Canadian debutant William P. Young, was released in 2007 by a publisher created strictly for the purpose of publishing this work. Initially, the author only intended to donate a few volumes of this plot to close friends, at Christmas 2005. The story, however, had such an amazing reception that he decided to reveal its contents to two film producers, Wayne Jacobsen and Brad Cummings.

Rejected by numerous publishers, The Cabin was eventually published by Jacobsen and Cummings, who created their own publishing company to do so. After that, recommended by word of mouth, it has sold at least two million copies. In Portuguese it was released in 2008.

This book, which focuses mainly on the true relationship between God and Man, has awakened and transformed the existence of countless people who, eager to share their experiences, formed the Missy Project, which aims to further disseminate the importance of reading this work. 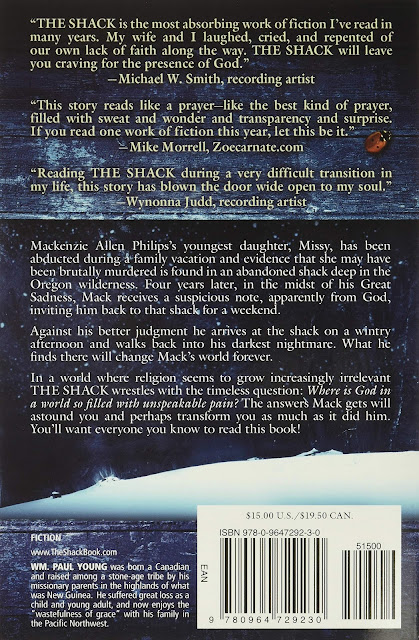