Book Review: Pitfalls of the Mind, by the author Augusto Cury 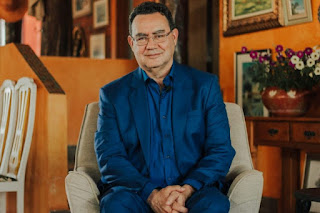 The book tells the story of Camille, a cultured, beautiful, rich, ravishing, intelligent woman, in addition to being a master at debating the whole world with her art of argument. Her words often caused disagreements and astonishment even to the psychiatric professionals who faced her, as they considered her a hopeless case. There were many comings and goings to the most diverse professionals, and no progress in their treatment.

What happened is that Camille found them incompetent, and bombarded them with the aggressive tenor of her words. And her husband, named Marco Túlio, a rich and important banker, when realizing his wife's situation, and when he realized that she was diagnosed with psychosis, social phobia, depression and obsessive compulsive disorder (Fear of contamination), of suddenly made a drastic decision. His first step was to buy a farm in the countryside called Monte Belo, so that his wife could improve her psychic state and relax with contact with nature. So, both went by plane, and arrived at the scene along with some security guards.

After jumping, they were faced with all the beauty of the place, and the people whose simplicity and humility enchanted Marco Tulio. One of them, the gardener, called Zenão do Riso, impressed them at first sight. He came all humming and smiling to greet the new bosses. Camille, weakened in her corner, only watched the gardener's manner, and suddenly, after the gardener looked at her, he surprised her. She, confused, did not believe in that happiness, and underestimated the wisdom of that simple gardener who used to talk to himself, and with his plants. And to always challenge her with philosophical quotes, and existentialism, which, for him, was not fully explored, and whose theme Camille adored, and had it as his philosophy.

And time was increasingly ephemeral, and Camille's worsening was apparent, as well as acquiring a pessimistic side about life. Marco Túlio, who thought that there would be significant improvements in his wife's condition, became even more desperate and sick. And in tears, she went to look for another health professional, named Marco Polo, who would later transform and radiate Camille's life. Marco Túlio then arranged an initial session with the extraordinary psychiatrist. Camille, who lived defenseless and a slave to her emotions, developed phobias, manias and hid an inferiority complex. Marco Polo, taught her the art of exploring herself, and to fight the emotional traps that imprison a massive amount of people, and their terrible consequence of anxiety, phobias and depression.

And I admit that I identified a little with the character himself, and I was amazed by the way the author led us to read, and his writing done with affection and simplicity. Reading becomes increasingly pleasurable with its form of analysis and depth. And yes, I recommend it for those who like the theme, or just to spend the leisure. We are a complex universe. Our mind is too powerful, with it, we can build radiant moments in our life, and the gift of analyzing our constant failures, and acquiring the experience that generates the wisdom to improve and become even better.

On the contrary, its consequent result is the large and terrifying monster lodged within itself that prevents it from essentially flourishing, and in some extreme cases, living serenely. Our mind is the worst enemy for our personal development, paradoxically, it is our loyal friend when it is in a stable state, and of Ataraxia (a philosophical term that means self-knowledge, tranquility of the soul, absence of disturbances and greater concerns ). For the author, "There are no impenetrable minds, only wrong keys."