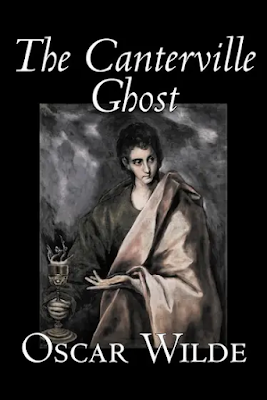 In late 19th century England, the family of an American diplomat, the Otis, ignore all warnings in the region and decide to buy the Canterville Game Reserve, a property haunted for 300 years by a mysterious ghost. The diplomat, his wife, their eldest son, their middle daughter, and their two twins, brought up in the practical style of the American republicans, didn't give a damn about the old English legends which, to them, were nothing more than fabrications. But The Ghost of Canterville (1891) is real, as Oscar Wilde shows in this tale that, behind the fantasy, hides acid stings on the end-of-the-century changes that American and English society went through.

The short story recently won a new edition in Brazil by the label Eternamente Clássicos from the publisher Leya/Barba Negra, clearly seeking to reach a younger audience through art that resembles the films of Tim Burton and the flashy colors on its cover. The edition is also complemented with illustrations by Wesley Rodrigues that are more reminiscent of sketches than drawings, and fit perfectly into the book's graphic proposal. After the purchase of the Canterville mansion, on the first night the ghost reveals itself to the Otis, but contrary to what anyone who fears for death would do, no member of the family feels shaken by the appearance of Sir Simon Canterville.

The family's practicality and materialism lead her to see the ghost only as an inconvenient guest who won't let them sleep, even looking for material means for Sir Simon to leave them alone. However, the bratty twins start to provoke the ghost by playing pranks on him, causing the ghost to enter a depressed and frightened state, the opposite of what should happen. The ghost then begins to fear the living when all his attempts to scare them go awry. Not even the most elaborate malevolent disguises can shake the Otis. The entity that was once evil and responsible for evil acts, then becomes a being worthy of pity, with all its tradition in hauntings ignored.

Oscar Wilde makes a good definition of what kind of person the Otis are through the ghost: “They were evidently people who were on a lower, materialistic plane of existence, totally incapable of appreciating the symbolic value of sensory phenomena”. Here we can see the author's criticism of an industrial society that is tied to what is material, to consumption, with no space for lyricism, beauty and feeling. The cruel treatment that this family gives to the poor ghost ends up sapping his strength, putting an end to fantasy, to art. The ghost itself carries characteristics of the English of the time that are criticized by Wilde, such as the view of superiority for being old, having blue blood.

The Canterville Ghost is a readable tale that shows the characteristic irony that Oscar Wilde used in his writings. In it, both British society, with all its pomp linked to tradition and superiority, and North American society earn intelligent criticism from the writer, and the tale proves to be much more than a curious and different ghost story. Speaking of the devaluation of art, Wilde was the author of a great work that is still read and revered as quality literature, classics that are not despised as the Otis did with the ghost of Canterville.